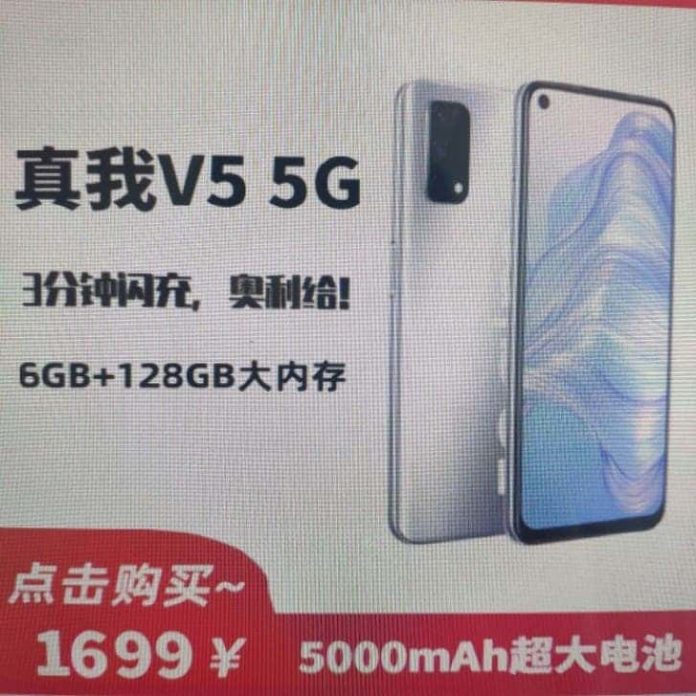 The upcoming weeks are more likely to be restless for smartphone lovers, extremely the Realme fans. Realme is going to launch a new smartphone series with Realme V5 on 3rd of August. It is 5G network based mid-range smartphone which will be featured with Mediatek Dimensity 720 SoC and with an unique design for Realme smartphones. You might have seen it’s design and it’s highlighted features in the past day. Currently, a latest leak reveals the cost price of this device. Realme V5 is priced at CNY 1,699 which is nearly equal to $245.

This is the price of the device variant of 6GB RAM and 128GB of internal storage. But, unluckily there are no hints about the other variants of RAM and internal storage of this device. Considering, the teaser launched by the company, Realme V5 will be powered by a battery having 5,000mAh capacity. But there are no news about the fast charging feature being provided to this device. We hope that the Dart Charge technology to make a return with this device.

But, at the mean time a smartphone having model number RMX211 have been spotted in AnTuTu Benchmark. It scored an exact points of 301,380. This score is quite impressive regarding the performance of Dimensity 720 chipset. Also this processor is the competitor of Snapdragon 765G processor, but we have a doubt about this phone being available on this price point from Realme. The 5G chipsets from MediaTek has already proved that they are available at cheaper price than the Qualcomm’s Snapdragon 765G. It is much difficult to get a phone having Snapdragon 765G processor priced below $300. We can take Redmi K30i as an example. This chipset is priced high because of it’s 5G capability and nothing more.

Alongside with the performance and battery, we also have a hope that the Realme V5 will offer us more powerful camera performance. Its Quad-Camera arrangement sits within a square-shaped camera layout. It’s the first phone from Realme to embrace this plan language, which right currently can be viewed as standard since a ton of organizations are utilizing it. We anticipate a major spotlight on Night Mode and Portrait shots. All things considered, Realme is giving a focus in the generation Z with this handset.

At first, the device will be released in China. The coming time will reveal whether the V-series will be exclusive only to its domestic market or if it will make way to the global markets too.