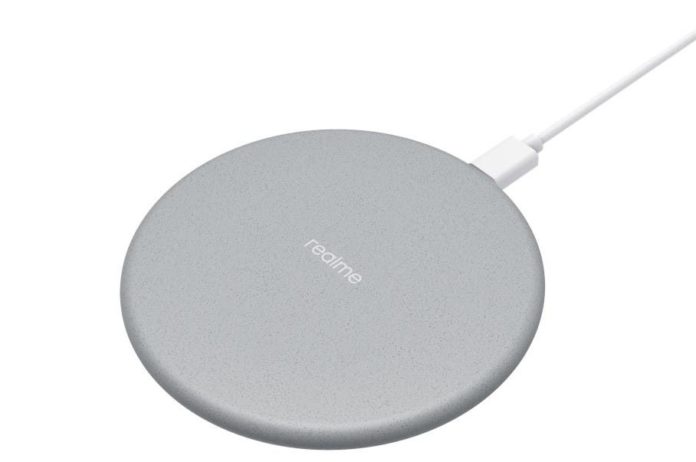 During the launch of Realme Buds Air TWS, Realme teased a wireless charger in India. But, the charger was not made available for many months. As the CEO of Realme hinted about this charger, it is now available for purchase on it’s website and is priced at Rs. 899. Along with it, Realme’s CEO has announced for the arrival of 50W and 65W mini adapters in India.

This is the first time that Realme has been involved in the manufacture of the wireless charger technology. Realme Wireless Charger is available in a single grey colour option on Realme’s official website. This charger is also featured with universally compliant Qi Wireless Charging Standard

The charger has a silkscreen print along with matte soft paint on the surface of charging. On one side, there is a port for USB Type-C which can be well appreciated. For the better grip, the lower part of the charger is well surrounded by circular rubber stripes.

The interesting thing about this charger is that it has a “Made in China” tag on the bottom of it and a model number RMA203. It’s maximum output rating is 10W but the specification shows that it gives a maximum output of 7.5W for iPhones when it is supplied with the input of QC 2.0(10W) or a 3.0 (18W) charger.

It is just 9mm thick and has features for foreign object detection, power transmission distance of about 5mm or less. Realme claimed that it not only supports the Realme Buds Air but also capable to charge other devices like smartphones, wearable gears which supports Qi standard.

It is currently available for purchase on Realme’s official website i.e. www.realme.com for the price of Rs.899. We expect it to be available in other platforms too like amazon, flipkart, etc.

CEO of Realme, Mr. Madhav Sheth has publicly announced that the company is going to launch 50W and 65W Ultra-Thin SuperDart Charger in India very soon.

If we look at the adapters history, Realme was the brand to launch 125W Charging adapter in the Chinese Launch event of Realme. And this looks pretty similar to the mini-SuperVOOC charger which was launched by OPPO on it’s own launch event.

If Realme also uses the same tech inside it’s upcoming chargers, the 50W charger will get a Gallium Nitride for the conduction of the high voltages and currents of less quantity. Until it’s launch, we have to wait for the official reveal from Realme to know more about it.